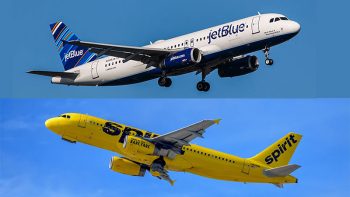 A dramatic shake-up in the U.S. airline industry 28JUL. Just one day after Spirit Airline’s months-long  – and public – attempt to merge with Frontier airlines fell to pieces, it was bought outright by JetBlue.

The deal is reportedly worth USD $3.8 billion in cash. That’s a far richer deal than the one with Frontier that fell apart. Frontier was only offering USD $2.6 billion in cash and stock.

JetBlue’s purchase of Spirit Airlines creates the U.S.’ fifth biggest airline. The combined fleet totals over 450 aircraft, operating 1700 flights daily to 125 destinations in 30 countries. Its annual revenues are expected to be nearly USD $12 billion, and JetBlue expects to save up to USD $700 million each year.

“We believe we can uniquely be a solution to the lack of competition in the U.S. airline industry and the continued dominance of the Big Four,” JetBlue CEO Robin Hayes said in a statement in a reference to the country’s top four airlines: American, United, Delta and Southwest.

“By enabling JetBlue to grow faster, we can go head-to-head with the legacies in more places to lower fares and improve service for everyone.”

For months, JetBlue had been overtly campaigning to convince Spirit Airline’s shareholders to reject Frontier in its favour.

Now the companies have worked out a deal, it still needs final shareholder as well as regulatory approval.  JetBlue and Spirit say they expect that process to be complete in time to close the transaction in 2024.