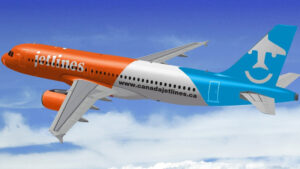 After many failed attempts to get a ULCC off the ground, Canada Jetlines is floating a new lift off plan. This time, bringing a slate of high profile executives to the business and a redistribution of shares to parent company, Global Crossing Airlines Group.

“We know we have a credibility problem in Canada”, Ryan Goepel, Chairman of Canada Jetlines, told Open Jaw, “which is why we’ve aligned ourselves with a top level airline team and the backing of an experienced airline company.”

GlobalX, revealed a new management team and Board of Directors to lead the company. After distribution of shares, GlobalX will retain 25% of Jetlines shares. The companies will operate as separate entities.

“The plan is to begin flying as a charter airline in winter 2021/2022”, added Goepel. “Scheduled service will come later.”

Canada Jetlines has been planning a launch in Canada as an ultra low-cost carrier since at least 2012, according to Business In Vancouver. The company has faced setbacks while struggling to secure financing for a capital-intensive takeoff and difficulties in securing a management team to lead the business. In late 2019, after the resignation of its CEO Mark Morabito, it entered into a letter of intent with Delaware-based Global Crossing Airlines.

Eddy Doyle was named as CEO of Canada Jetlines in DEC 2020.

Doyle has over 35 years experience in aviation. He started his career as a pilot in the Canadian Air Force before joining Air Canada in 1989. He served in many management roles during his career at Air Canada, including Chief Pilot Member of the management team responsible for the Air Canada bankruptcy restructuring process and Vice President Flight Operations.

Operations as a Canadian charter airline will begin once applicable regulatory approvals are in place.

GlobalX also intends to complete a private placement financing of Jetlines and seek a listing of the Jetlines shares on the TSX Venture Exchange, but no assurance can be provided that such financing will be completed or that a listing will be obtained. Any such listing will be subject to Jetlines fulfilling all of the requirements of the applicable stock exchange.

Anna can be spotted attending events around town for Open Jaw. The Alberta Rockies, Hawaii and France's Provence region are among her favourite destinations. She's a proud cat mom and a terrible snowboarder.