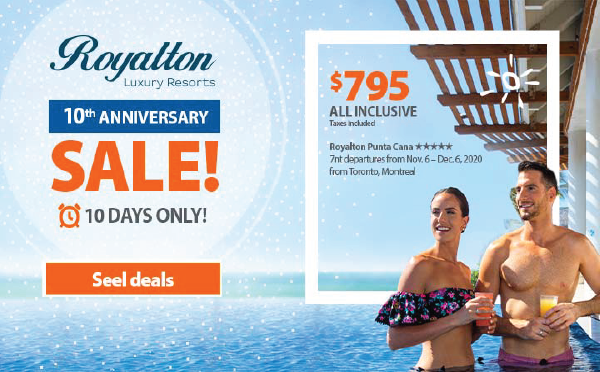 From now until 02OCT, 2020, the tour operator is offering their biggest savings of the decade on vacation packages to Royalton Luxury Resorts. There are only ten rooms available for each departure date, so travellers are encouraged to book as soon as possible.

The Royalton 10th Anniversary Sale includes COVID-19 Coverage at no additional cost. This coverage is included in all vacation packages as part of the Safe with Sunwing commitment.

Each time agents make a booking at Royalton Luxury Resorts during the ten-day sale, they’ll be entered into a contest for the chance to win an all inclusive vacation for two at the Royalton CHIC Suites Cancun Resort and Spa, Royalton CHIC Punta Cana Resort and Spa or Royalton White Sands Montego Bay.

One of the accommodations travellers can stay at is the Royalton Punta Cana Resort and Casino in the Dominican Republic. Packages to this property will cost $795 per person for a 7-night stay in a 10th Anniversary Room, departing from Toronto and Montreal on Fridays throughout November.

Another property included in the Royalton 10th Anniversary Sale is Royalton Riviera Cancun Resort and Spa in Riviera Maya. For $895 per person, vacationers can book a 7-night stay in a 10th Anniversary Room with departures on Sundays throughout the month of November from Toronto or on Fridays from Montreal.

In addition, agents can give their clients added peace of mind with Sunwing’s flexible booking options which allow customers to change or cancel their plans anytime with ease, and receive up to $800 per couple with complimentary Price Drop Cash Back.