Meteorologists say the volcanic ash cloud that has disrupted air travel in Europe for nearly a month is clearing as the eruption in Iceland loses some power and winds change course.

That’s great news for airlines and tourism operators as the peak season for Europe travel is just beginning, but experts are still warning that there are no signs at this point of an end to the eruption.

Ash that spewed from the Eyjafjallajökull volcano earlier this week has dispersed and fresh ash is being carried east and north, away from European airspace, Helga Ivarsdottir, a meteorologist at the Icelandic Met Office told Bloomberg News.

“Europe should be able to relax over the weekend, with the exception of the Faroe Islands and Scotland, which have to be on guard,” Ivarsdottir said. “Ash released in the past few days is now far south of Iceland and could have an impact on air traffic, but as time passes the cloud gets thinner and is therefore of less concern for airlines.”

Icelandic volcano experts say that the eruption is losing some force, but warn that the change so far is minor and “there are absolutely no signs of the eruption coming to an end.”

Meanwhile, Thomas Cook Travel boss Manny Fontenla-Novoa echoed comments from TUI Travel CEO Peter Long who had said future disruption from the volcano should be minimal because of new protocols that enable airlines to track the ash by satellite and re-route aircraft accordingly.

“Any further incidents we’ll be in a much better position to deal with,” he told Reuters. 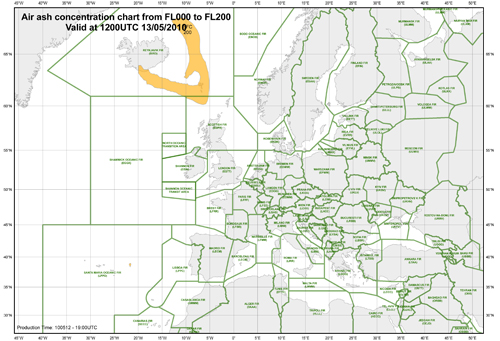