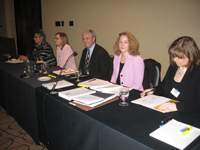 TICO staffers prepare for the discussion 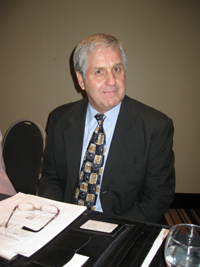 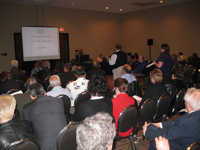 The event, while sparsely attended, featured a number of very engaged and informed participants

TICO held its fourth and final Town Hall Meeting in Toronto on Tuesday evening. Following similar meetings in London, Sudbury and Ottawa, the meeting was called to discuss three key issues – although, as TICO CEO and Registrar Michael Pepper was careful to point out, the evening was just a discussion as TICO has no authority to change Ontario’s travel industry act: that requires government approval.

That fact didn’t dampen the involvement of the some 50 audience members who clearly care a lot about their businesses and the future of travel. In the group were retailers, tour operators, motorcoach tour operators and insurance company representatives.

First item was the Industry Representation and Board Composition. While some felt that the CATO representation (at 3 of the 15 board members) was disproportionately high, CATO’s Pierre LePage pointed out that the volume of business by CATO members justifies that participation. Bruce Bishins of ARTA voiced his opinion that TICO should have more elected members. McTavish Travel’s Trish McTavish was quick to point out out that the most important criteria for board members is that they agree to prepare for and attend meetings.

Next up was a discussion on alternative financing of the compensation fund. As Pepper pointed out, the fund is now too diminished to cover a major failure should one occur, and there are also definite gaps in protection. “The model is broken and must be repaired,” commented LePage.

After some discussion the consensus appeared to be that a mandatory consumer-pay model, such as is presently in effect in Quebec, would work best. Bishins made a point that was well-received by the group that, “There’s a major gap – the need to protect retailers’ commissions.” It is travel agents who contribute to the fund, but travel agents’ losses are not protected when travel wholesalers fail.


Lastly, the issue of registering individual agents came up, prompted by TICO staffers’ comments that they are getting increasing numbers of phone calls from consumers wanting to know if a given individual is a “legit” agent, yet due to privacy issues TICO cannot confirm or deny the information. (Consumer concern is expected to increase with the growth of home-based agents.) B.C. already has an individual registration process in place and Quebec plans to put such a program into place.

Those in the audience who addressed the group had a number of issues with individual registrations, including the age-old concern of “who owns the client” as well as liability and insurance issues. The suggestion was made to the TICO staffers to simply tell the consumer to ask for the agency’s phone number and confirm if the individual is an employee.

Then the floor was opened up to Q + A and… there were none, and the group filed out.

As Michael Pepper put it, “The input’s been pretty good.”  Shame that in a province with 2,143 travel agencies and hundreds of others involved in the management of tour operations, airlines and other industry bodies, only 50 came out to discuss issues of such importance to their livelihoods.