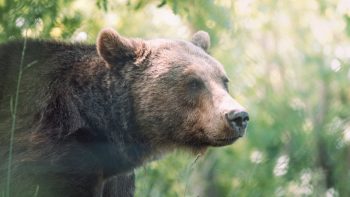 It might have ‘killed’ the mood at a recent destination wedding in Montana’s Glacier National Park. It certainly killed a moose calf.

In the latest social media sensation video, a happy couple reciting their vows is reportedly upstaged by Nature taking its course in the form of a grizzly bear attacking - then dining on - a young moose nearby. The event happened in front of the moose calf’s mother - and within the sight lines of the gathered wedding guests on the other side of the lake.

(The image here is of a different bear, who would likely do the same thing if he had the chance.) National Park Service staff say grizzly bears are ‘omnivores’ - that is, they’ll eat just about anything if they’re hungry and the opportunity presents itself. More than 90 per cent of their diet apparently comes from grass, berries and insects. It’s that other 10 per cent that has most mammals - including humans - worried.

The wedding videographer captured the moment and put it up on youtube, where it’s gotten hundreds of thousands of views and hundreds of ‘likes’  - and not even one ‘thumbs down.’

I personally couldn’t ‘bear’ to watch the video but apparently, “the camera focuses on the groom as he recited his vows when a strangled cry could be heard in the distance.

“The camera cut to show the bear on top of the moose calf, who kicked its legs to no avail.”

"’And that's why we didn't go to the north shore, ladies and gentlemen,’ someone says off camera.”

The wedding ceremony paused while the bear finished killing its meal in the water and dragging it into the trees, with the rather calm guests continuing to comment as the cameras were rolling about their real-life witnessing of Nature in action.

Apparently most guests seemed to think the “Mutual of Omaha” nature moment in the woods made the wedding even more of a ‘special occasion.’

Only towards the end does someone wonder if they should relocate the wedding. Clearly, nothing could phase that destination wedding planner!