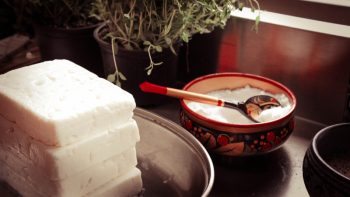 In one of the ‘cheesiest’ culinary disputes between nations, this one takes the cake – or, er, cheese.

Denmark has lost its case in Europe’s highest court to sell cheese labelled ‘feta’ outside the EU.

As Reuters reports, Greece took Denmark to the Court of Justice of the European Union in Luxembourg to defend its exclusive right to use the term ‘feta’ in selling the brined sheep or goat’s milk cheese.

Greece claims feta is part of its cultural heritage as it’s been making the cheese for 6000 years. The country continues to produce over 100,000 tons of it every year, so the economic incentive equals the issue of national cultural pride.

Already, anyone travelling in Europe ordering feta will only be served the Greek dairy product. That’s because, since 2002, feta has been designated a traditional Greek product by the EU.

That twenty year-old designation already protected the use of the name ‘feta’ within the EU.

It’s sales outside the EU that were the subject of the most recent court case. You can buy made-in-Denmark ‘feta’ in North America. Some might be in your fridge right now, or served to you in a ‘Greek salad’ at restaurants when you travel to North American cities.

On its part, Denmark argued to the court that banning it from exporting ‘feta’ would be an “obstacle to trade,” but the court sided with Greece. You won’t be seeing any more Danish flags on packages of feta cheese in the market at home.

Denmark may be pretty ‘cheesed off’ about being banned from exporting ‘feta’ cheese.

I guess the Scandinavian country will have to stick to Danishes then. Oh wait – is that a protected designation?  Someone tell Tim Horton’s.