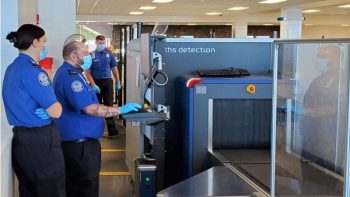 It’s like people have forgotten how to travel. The resurgence of air traffic in the U.S. has led to the return of another phenomenon: security officials finding bizarre things at airports.

It’s not just the ridiculous number of people that TSA agents have reported in failed attempts to bring firearms through airport security checkpoints, as SimpleFlying reports.

Apparently, most are so blissfully unaware of being armed and dangerous that they simply ‘forgot’ they had a gun on their person. And I feel stupid when I forget I still have water in a bottle going through security.

It gets better, though.

On 06APR, security officers at Boston Logan International Airport seized a ONE FOOT long knife hidden in a passenger’s cane.

As the TSA diplomatically put it, “Some carry-on items may be prohibited even if they appear not to be, like a cane with a hidden sword."

The 70-year old owner of the normal-looking cane - that revealed a sword inside when the handle was twisted off - was not apparently en route to fight a duel with his Grand-Pappy’s sword cane.

TSA spokesperson Daniel Velez said on Twitter last week that the man “had no idea the blade was in there."

Yesterday @TSA officers @BostonLogan discovered this hidden blade inside of a cane. When questioned by @MassStatePolice the man claimed he had no idea the blade was in there.🤷🏼‍♂️After surrendering the cane, he was cleared to continue. #travelfail pic.twitter.com/Toqo0OORYZ

The apparently surprised nice old gentleman surrendered his sword cane to authorities and was permitted to proceed on his way after questioning by Massachusetts State Police, who were no doubt trying hard not to smile.

Only one day later, on 07APR, another passenger, travelling through Ithaca Tompkins Regional Airport in upstate New York, was caught going through security with a dagger concealed in a hairbrush. Unlike a sword cane, there’s no family heirloom ‘out’ for that one.

But the ‘crowning’ airport security discovery of recent days has to be the six - yes six! - human skulls seized 29MAR at Chicago O’Hare Airport. That’s only three short of a baseball team.

The skulls were en route from the Netherlands to Iowa and were detected by ‘irregularities’ in x-rays on arrival at ORD. They were ultimately sent to the CDC and destroyed.

The moral of the story as travel returns: Think twice. Pack once.