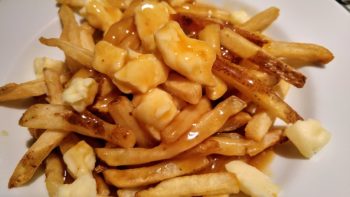 The Ukraine war has already had tragic consequences for millions in Europe - and a tragi-comedic sidebar impact on a staple of French Canadian gastronomy.

In a case of mixed-up homonyms, and proof that everything crazy happens on social media, a famous Quebec dish has borne the brunt of some people angered about the Russian president’s invasion of the Ukraine.

As protests have targeted the Russian leader ‘Putin’, oddly, so too have they targeted ‘poutine.’

We're not 'poutine' you on!

While the words may seem alike especially in French pronunciation or transliteration, it’s hard to understand the confusion - at least here in Canada.

Nonetheless, Maison de la Poutine, a restaurant with locations in both Paris and Toulouse, reports it has received threats and insults by social media users 'cheesed off' about the violence in Eastern Europe.

Evidently, it’s a case of mistaken identity among inhabitants of France who remain unfamiliar with the gooey, cheesy, gravy-soaked ‘frites’ from Canada being served in the Quebec-inspired restaurants in France.

In an emergency effort at educating irate French social media users, the company tweeted out a response:

“Our dish was born in Quebec in the 1950s. And the stories to tell its origin are numerous. But one thing is certain: poutine was created by passionate cooks who wanted to bring joy and comfort to their customers.”

It didn’t really stop the madness, as, if you read on in French, some users said the company should just change its name!

Even in Quebec itself, social media users have come to virtual blows over cheese-and-gravy fries.

Le Roy Jucep, which claims to be where poutine was invented, said it’s no longer using the term ‘poutine’.  Instead, it now describes itself as “the inventor of the fries-cheese-gravy.”  Not quite as catchy.

It’s experienced such unexpected backlash, the restaurant is not even daring to fully write out the now-forbidden word!

“Dear clients,” the resto recently wrote on facebook, in a post that was subsequently taken down, “Tonight the Jucep team decided to temporarily retire the word P**tine from its trademark in order to express, in its own way, its profound dismay over the situation in Ukraine.”

But at least some social media users are resisting getting on the ‘gravy train’ of conflating anti-Putin anger with anti-poutine threats.

People, please stop confusing Putin and poutine. One is a dangerous and unwholesome mix of greasy, lumpy, and congealed ingredients, the other is a delicious food.