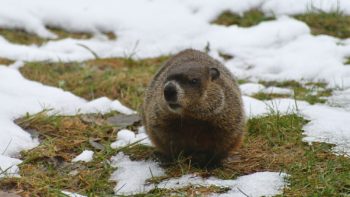 As jolly small-town festivals go, the northern, North American tradition of using rodents as meteorologists seems here to stay. How could it fall by the wayside when it was immortalized in a beloved Bill Murry film, anyway?

In states and provinces hit hard by winter, the annual Groundhog Day test of what may apparently originally have been Mennonite lore is simple. If a Groundhog emerges from hibernation and sees its shadow in bright sunlight at dawn on 02FEB, it would be frightened back into its underground den and winter would continue for another six weeks. If it’s cloudy and there’s no shadow, spring will arrive early.

(Writing from my desk in Ontario, I’m happy to report that no groundhog could have seen its shadow here this morning, so this hard winter should be wrapping up soon.)

Maybe COVID has made people so desperate to travel for any excuse, that writers at England’s The Guardian newspaper are panicking about local Groundhog Day festivals over here across the pond.

It notes last year’s mid-COVID ‘coverup’ of the death of Ontario’s albino Wiarton Willie, who failed to make an appearance at the virtual version of the annual sunrise social. Only later, after social media took up his cause, did organizers admit the famous buck-toothed white rodent had gone to the great hayfield in the sky.

And last weekend, just prior to this year’s festivities, another ‘mysterious’ death. This one in New Jersey, where Milltown Mel perished just days before his annual moment in the spot- err, sun-light.

Are Groundhog Day celebrants cursed? In other cases of rodent meteorologist demise, city officials have been caught out in shocking cover ups - like substituting a taxidermied stand-in at a public funeral for the chunky burrowing vermin.

This year, Wiarton Willie is a standard, brown groundhog, a much easier role to fill than a hard-to-find albino.

Maybe Groundhog Day is not cursed. Wiarton Willie, Punxsutawney Phil, and Milltown Mel are like the Easter Bunny or Santa Claus. The understudies make the show go on.

It’s a matter of faith and social function. No matter where they are celebrated, because their communities gather to make it so, they are real.

Regardless of which rodent fills its furry little shoes, every local Groundhog Day celebrant helps communities come together, gives people the inspiration to travel to local festivities, and reminds us all that even the darkest winter will soon turn to spring.