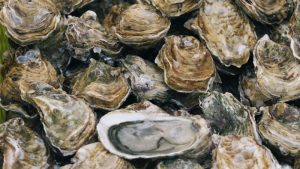 French farmers are not known for taking things lying down. Now, any traveller to France indulging in one of its more famous seafood delicacies might become an unwitting part of a sting operation by French farmers targeting thieves. Oyster thieves.

You might think that it’s only French luxury lifestyles brands of perfume, handbags or jewelry that have problems of theft and knock offs.

It turns out, French oyster farmers have the same problems.

(Food theft isn’t just a thing for a country with an epic culinary tradition. Even Canada has had recent, famous/ notorious instances of theft of hundreds of gallons of maple syrup and just over the holidays, truckloads of butter from a dairy. In my mind, there’s someone with big plans for maple syrup butter tarts).

Food & Wine magazine tells the story of an innovative French oyster farmer on the Mediterranean, who lost more than 6,000 pounds of pricey shellfish a few years ago.

He plotted a solution, one that didn’t rely on cameras or security guards. Instead, he went old school, typing up notes and slipping them inside a number of his oysters.

And they weren’t love letters.

Instead, they advised the person opening or eating the oyster had won “their weight in oysters,” giving a number to call to collect the imaginary prize.

If anyone calls the number, and the oyster in question doesn’t trace back to an authorized vendor, the oyster farmer knows something is ‘fishy’, and calls the police to track down the thieves.

His idea gathered steam among other local oyster producers, and according to reports, thefts of the high-falutin’ shellfish in the region have plummeted over the last three years since the message-in-a-mollusk sting operation began. It’s worth the time at the typewriter: just last fall, in another oyster region in France, Charente-Maritime, where the sting operation is not in place, oyster thieves made off with three tons of oysters worth over $25,000.

Other oyster farmers have taken the high-tech route. One family oyster operation has reportedly invested in a laser system worth millions to engrave its shells to deter counterfeiters from trading on their good name.

But the aw-’shucks’ typed message approach seems to be enough to deter thieves with their eyes on a shellfish prize.