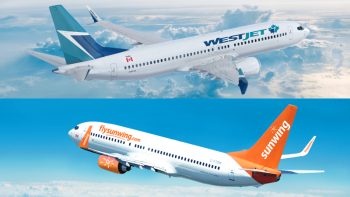 UPDATED 12:08 PM EST, 02MAR: WestJet and Sunwing made the official announcement that they have reached a definitive agreement under which the WestJet Group of companies will acquire Sunwing Vacations and Sunwing Airlines.

The purchase price has not been disclosed but the companies say the takeover could be concluded before the end of the year.

In a joint interview, Alexis von Hoensbroech, chief executive officer of WestJet, and Stephen Hunter, Sunwing’s CEO, said there would be no job losses as a result of the purchase.

“We have a lot of staff [who] have been here for a long time. So I have many sleepless nights thinking about how we’re going to get through this pandemic,” said Hunter.

“Not only is it going to be okay because finally, our Prime Minister helped us out with his announcement a couple of weeks ago [on looser COVID-19 testing rules for travelers] and sales have been tremendously good for everybody across the sector. But ultimately this marriage will mean more jobs for Canadians.”

Sunwing had borrowed $227 million from the federal government during the pandemic under the large-employer program, as well as nearly $100 million more to refund customers for cancelled trips. Sunwing said that government loans will be repaid upon closure of the deal with WestJet.

The companies revealed that Hunter, son of Sunwing founder Colin Hunter,  will run the combined tour division. He added that he is “optimistic” that the deal will get regulatory approval.  He cited the combination of “complementary businesses” of the Western Canada-based airline and the Ontario-based tour operator.

“We are complementing each other ... in areas where we both are weak,” Hoensbroech said, adding the acquisition of Sunwing will allow WestJet to access a bigger share of Canadian sun resort business.